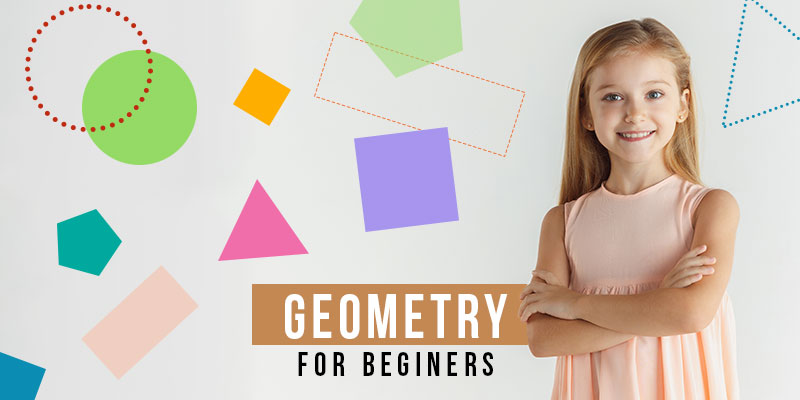 Geometry is derived from the Greek word ‘geomtron’ where gē means earth and metron means measure. Geometry is therefore a branch of mathematics concerned with properties and relationships of lines, angles, curves, and shapes.

Children often complain why they have to learn this rather complicated subject ‘Geometry’ and where they will utilize the concepts of ‘angles’, ‘points’, and ‘area’ etc.

As an adult, if your child is ‘Math phobic’ and tries to give you 100 reasons not to study the subject, simply sit down and explain the numerous benefits of Geometry and how it creates an advantage to students who are good at it.

The graphic designer needs to have a good understanding of dimensions such as height, width, and surface area, to be able to deliver designs that appeal to the audiences. For example; if the artist is making a ‘standee’ for an event, he has to first set a layout and visualize how appealing the design will appear on the standee. Similarly, if an exhibition booth ‘display stall’ needs a branded banner, the designer should ‘do the math’ and figure the logo and the heading’s best placement.

Robotics is picking up pace and there are numerous corporates who are venturing into Artificial Intelligence and Robotics space. Robots are capable of running errands and managing strenuous work activities, thereby minimizing the human efforts and reducing the chances of error. However, to assemble a tough robot, the engineer needs to have knowledge about structure and formation, such that the body of the robot is durable under all conditions. For this he needs a good understanding of many geometric concepts.

While constructing tall bridges, roads, and dams, the civil engineer first surveys the land for which geometry is of utmost importance to measure surfaces with precision. The infrastructure needs to stand the ‘test of time’ and each element must be thoughtfully planned. Even fancy buildings and sky-high towers need understanding of height limits, emphasis on central core, and a strong base to withstand the tall structure.

These are only a few examples and the above list can be further elaborated upon with other occupations such as; CAD Computing, Architectural Engineering, Fashion Designing, Animator, etc. that heavily rely upon the geometric capacities of the person.

Point: It is a location represented by a dot and it does not have any shape, size, or width. It is merely stationed at a particular position.

Line: A line is a one-dimensional figure that has no width, but it only has length. A set of points together form a line and they extend in opposite directions infinitely. There are different types of lines such as; horizontal, vertical, parallel, and perpendicular lines.

Line Segment: A line segment is a part of the line. The only distinction is that, lines have an end point, while the line segment doesn’t have any end point.

A Ray: A ray is a part of line that has one end point and extends indefinitely in the other direction.

Angle: A figure that is formed by two rays, that have a common end point is called an angle. The symbol of angle is ∠ and the protector is a device that measure angles. The two rays that join to form an angle are also referred to as ‘arms’ and the common end point where the two arms meet is called as a ‘vertex’.

‘Mathletics’ is an easy to use Math platform to substitute the need for a tutor. The platform is easily downloadable across any part of the world, including Dubai and GCC Countries. Parents who struggle with teaching Math and Geometry concepts to learners, now find relief thanks to the engaging and interactive game-like challenges & activities that the App presents. International schools in UAE, and Middle East, are adopting various ‘digital mediums’ for studies and encourage parents to take advantages of these simple, yet highly effective tools.